Anyone any good at alternator bodgery? E1A Major

Anyone any good at alternator bodgery? E1A Major

I'll be honest, I don't have much of a sense of humour when it comes to dragging large batteries any distance, especially when it's my own fault for a) getting somewhat ever-so-slightly maybe just a little bit stuck somewhere I shouldn't have been, and b) stalling the stupid thing with a flat battery and having to do the walk of shame whilst carrying said battery and explaining to the land owner that what he can see in the distance is a still life art insallation - not a tractor buried up to it's sump in his orchard.

So, knowing that I have a good dynamo (belt tensioner!) but the rest of the loom is burnt toast, and the regulator and dashboard were full of something that defied identification but may have been the fossilised remains heaven knows what, I find myself looking at an alternator sitting on the shelf. Don't know what it came off of, don't know if it works. It's a Lucas, no model id on it, 2 large spade terminals connected together + power out, and one small terminal ind. Anyone know how to bench test it? I've spun it up with a nut gun and only got 0.2v from the large terminal so do I need to put 12v in the ind line to excite it?
Wifey suggested the 'ABC book of AC/DC' by IC Sparks, but Amazon haven't got it...

I've already changed the tractor to -ve earth so led lights could be fitted and an accessory socket for a phone charger perhaps and will create a new loom as I go so the odd extra wire or ind light won't be an issue, but I don't want to get into modifying the brackets and mountings if it doesn't work. I've looked at, but not sure about, new 1 wire units - I've read a lot about them draining power as well, anyone tried these?
I'm not bothered about losing the dynamo etc., being able to use it far outweighs the cosmetics.
All opinions invited ( I don't care, it's been one of those days).
One person in ten understands binary, the other one doesn't.
Top

I did my Land Rover from dynamo to alternator 8-9 years ago now, I just got an alternator from an old Volvo, 3 wire type, with 2ft of loom and the connector for the back of it and just spliced it in as per a later series 3 wiring diagram - that’s how I would do a tractor, just like a Land Rover - here is the diagram that I made at the time 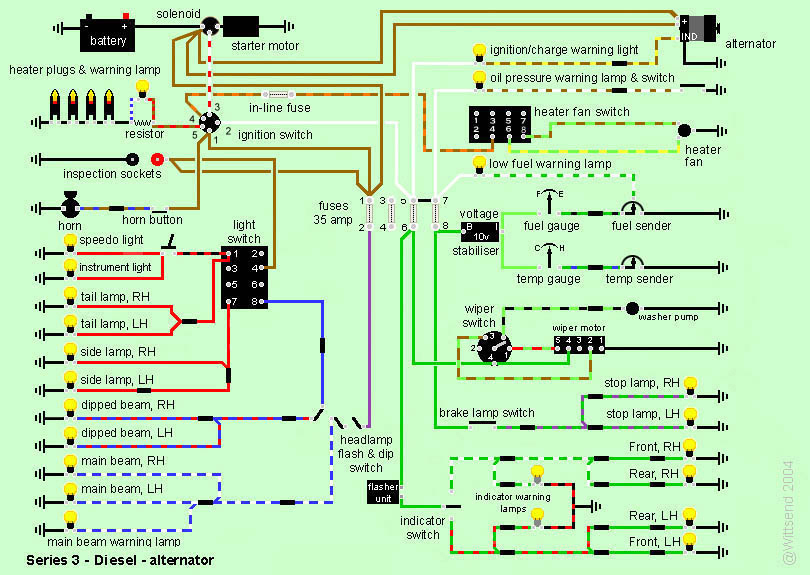 After chuckling to myself about your description of events...been there done that...and had to fix the faulty dynamo in our wooded bit of the far, far field, on our MF65 last summer while it was buried in brambles....I had a bit of a thunk.

From dim memory of watching a chap check a faulty alternator for me, and fix it in minutes for, relatively speaking, buttons compared to buying a refurbished one, his spinning up test rig was based on a bench grinder, fitted with a set of varying diameter pulleys (probably scavenged from a pillar drill), to give drive of the correct speed for the application. I have a sneaking suspicion that your direct drive test may not have been spinning the alternator fast enough to generate enough ergs to measure and a dummy load is also required...I had a quick look on YouTube and there seem to be many 'how to' videos to choose from, with varying levels of irritating presenters to entertain you

Thanks Andy,
That's better than you get in most manuals, nice work.
If I'm reading that right, 12v+ via the ind terminal should get it going if it's working. What I'm having trouble getting my head around is; key live to warning light, warning light to ind terminal which grounds the light and excites the unit - but when charging the light goes out which disconnects the excite line???
What am I missing here?
One person in ten understands binary, the other one doesn't.
Top

Thanks Slooby, rpm wise you could be right. I did try to get more speed with a socket wedged in the end of a 3k rpm B/D drill but the third time the socket described a perfect arc in the direction of next doors greenhouse discression decided it was time for bed.
As for the dummy load, it was driving at the time.
One person in ten understands binary, the other one doesn't.
Top

That video makes some sense of it and how the load works. Thanks for that, I'll give it a try.
One person in ten understands binary, the other one doesn't.
Top

hair bear wrote:~ key live to warning light, warning light to ind terminal which grounds the light and excites the unit - but when charging the light goes out which disconnects the excite line???
What am I missing here?

This bit you need to get your head around. Remember the guy who said "all things are relative"?, he may have been talking about alternators!
So you have: +12V (battery) -> Ig Switch -> idiot Light -> ind terminal.
when the engine isn't spinning, you have 0V on the ind terminal, so the idiot light glows.
As the alternator spins up, it starts to generate voltage which is also put on the ind terminal, so the idiot light has +12v on both terminal (or 0V across it), hence it goes out.

Does you alternator have the plastic rear shroud? have a look at pictures of a 15ACR
Personally I much prefer bosch alternators of the same vintage as they last much better (and have much higher output).
Having said that, one you have on the shelf holds many attractions!
Top

Most importantly it was the right price! Yes it does have the plastic shroud and yes the +12v on both ends makes sense. Once I've physically tried it for myself I'll hopefully understand it better.
Thanks guys, I'll let you know how I get on. Right now, I have a hole to fill in...
One person in ten understands binary, the other one doesn't.
Top

I have proof of concept. Rigged it up as per the video - except I had a ratchet strap holding it down - and it works. Sort of. The only thing I couldn't find was a good battery. The result being the battery I had only had 7 volts in it. Spun the alternator up with the drill, the light goes out almost immediately and the voltage goes up to around 9v.
So... a) Is the output reliant on the voltage on the other end? b) Would a good battery encourage a better charge? c)Is it just a lack of rpm?
I think the donor was a Leyland 262 so the pulley is fairly small and should give a reasonable speed, not accounting for variation in crank pulley size.
One person in ten understands binary, the other one doesn't.
Top

That sounds very promising.
There are a number of reasons you battery is very low including shorted cells. In this case, the remaining cell could have decent capacity and be clamping the voltage as they take a charge.
Remember you can't get more power out than you put in, so say you've got a 20V drill that can pull 5A from it's battery, that's only 100W at full output.
A small pulley may give you 4x crankshaft speed, so 2000rpm on the drill would be equivalent to 500rpm on the crank - idle speed.