Hi all, we are in australia and have bought a DRM & Co D-562 at a local 'clearing' sale, we have a parts book for the machine and the Cummins motor,
but we are looking for an Operator / Service manual, as most of the usual graders here are Allis, Gallion, Cat & JD to mention a few,
if anyone can help that would be great, if anyone knows any info on the old girl, as it is an unknown factor to us.

The Grader was made 1975? just before Champion bought DRM ( dominion road machinery company ) in 1977 l think.
(This is where l live Holger!)

The company started in America back in 1875. But the Canadian company originated in 1892 when "Copp Brothers" acquired the
Canadian rights to manufacture & sell "Champion" graders in Canada. The first model being the Steel Champion Grader in 1895,
this being a Horse draw machine built of all steel construction.
The Copp brothers were bought out in 1897 and the company changed to the "Good Roads Machinery Company".
The original American company taking control in 1909, with the firm being known as the "American Road Machinery Company of Canada Ltd".
In the American depression of the 1920 the companies parted, and became "The Dominion Road Machinery Company".

A powered model based on the McCormick-Deering tractor was launched in 1928, called the "powered Maintainer".
A Hydraulic operated version the "Hydraulic Powered Maintainer was Launched in 1936. With dual tandem drive (6x4) from 1939.
Then introduced blade lift for bank triming in 1946.

In the 1950s they dropped other lines and concentrated on Grader production. The D500 series introduced.
Fitted with a 12 ft blade and Choice of engines from 85-140 hp from GM or IHC.

Then in 1975 a redesigned D700 series was introduced, the first with articulated bodies.
New line of Production graders launched for the Mining industry. 80T (latter upgraded to the 100T),
this was a massive machine with a 24 ft blade, weighing in at about 90 ton with a 700hp Cummins engine.
Few were built and in 1989 the design was sold off to the Dom-ex Corporation in Minnesota.
Company name changed to Champion Road Machinery Company in 1977 from the Dominion name.

They merged some operations with Volvo in 1997, but part of the company was de-merged in 2004 and still make a
line of compact machine independent of Volvo. Following the Volvo merger the series VI machines were
renamed as "G" designations and Champion was dropped for the Volvo name on the machines.
Production continued in Canada, but the Articulated versions were discontinued.

thanks for the information

please let us know how you get on with your latest acquisitions.

Thanks Jeremy, l found a DRMCO D562 Manual in the USA and am waiting tenderly for it to arrive here.....l have sent my other stuff to Holger, and when l have the Champion manuals l will send them to him also....The manual pictured is what l am after... l hope it is what comes in the mail....
Top 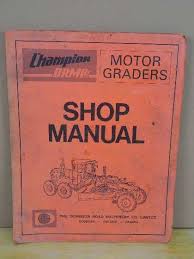 I have never even heard of such a machine

When I here Champion I think of Chamberlain tractors , turns out I'm not even close lol

When I hear Champion I think of a horse.
Norm

Yes l have just about what l need and l sent them all to Holger to list on this site for you all.
Top

I was a jockey on one of these in 76 for Mc Alpines, only thing I remember was it was heavy on the levers, possibly because it was new, otherwise nothing remarkable.
Top
Post Reply
9 posts • Page 1 of 1