Are you working on a certain project? Renovating an old machine?
Tell us about it here and show us the progress.
Post Reply
60 posts

You will need to dump drive when changing gear on the move. Use when needing to slow forward progress when lifting loader. I would also always let the revs idle before releasing the dump to reduce wear and tear.
Top

While I continue in my exploits to find out why drive is not engaging, as discussed 1987 JCB 3CX Syncro Shuttle Drive Problem, I'm taking the oportunity to give everything covered by the steering column shroud a damn good clean because it was, unsurprisingly for a 33 year old bit of plant, filthy behind the covers.

I was fairly sure that the Hazard Warning light switch wasn't working, and having removed it from the shroud I managed to find the Hella part number (3916-01), looking up the number online the I found that the near equivalent is still on sale and it's not exactly the cheapest unit (between £20 and £30), however looking more closely I thought I might be able to take it apart.

I was able to, and it too was filthy, so I've just given it a good clean out while sitting here at my Laptop, the constituant parts look like this: 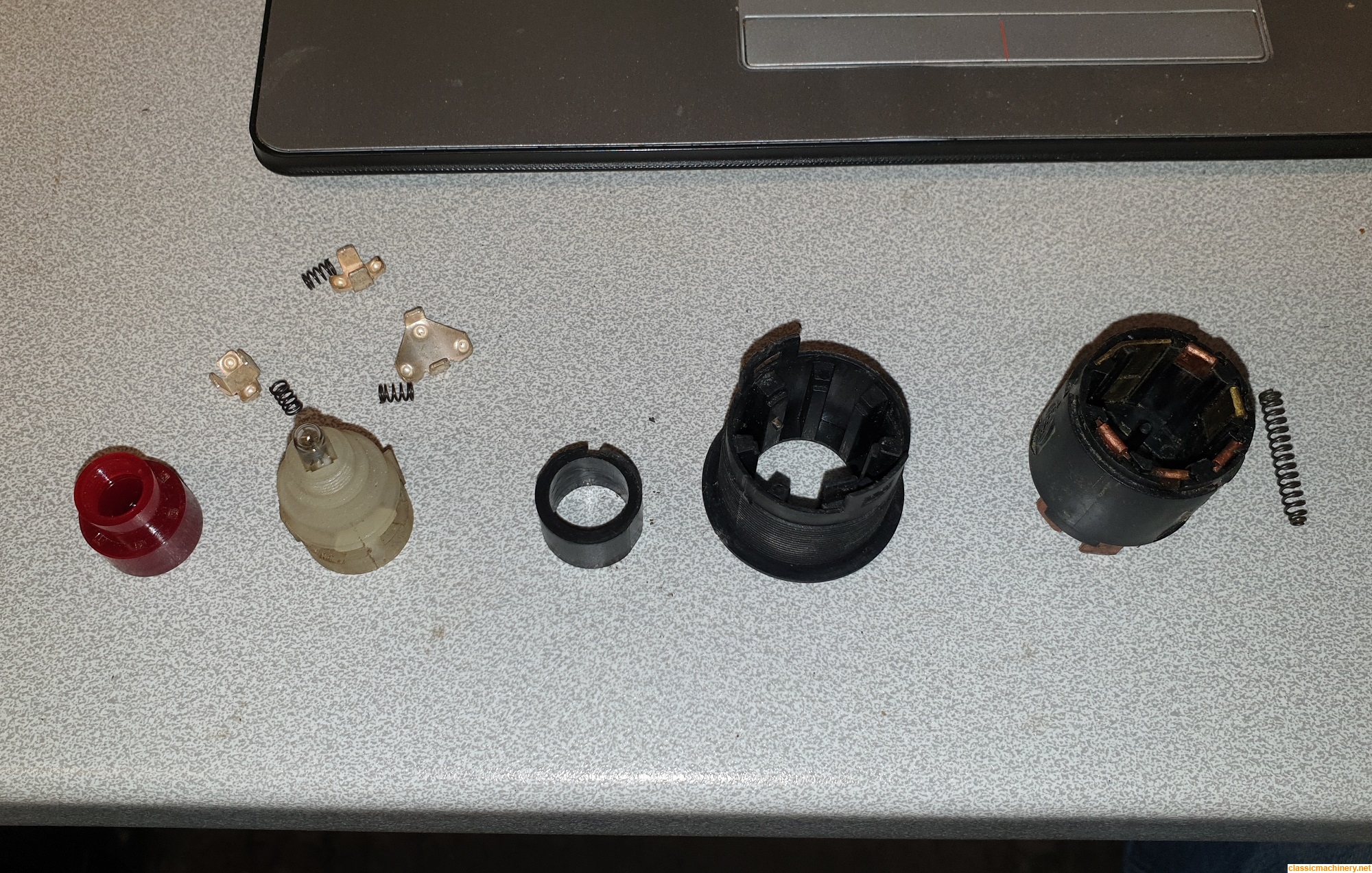 It was fairly simple to put it all back together and now the red button pops back out, something it didn't do previously: 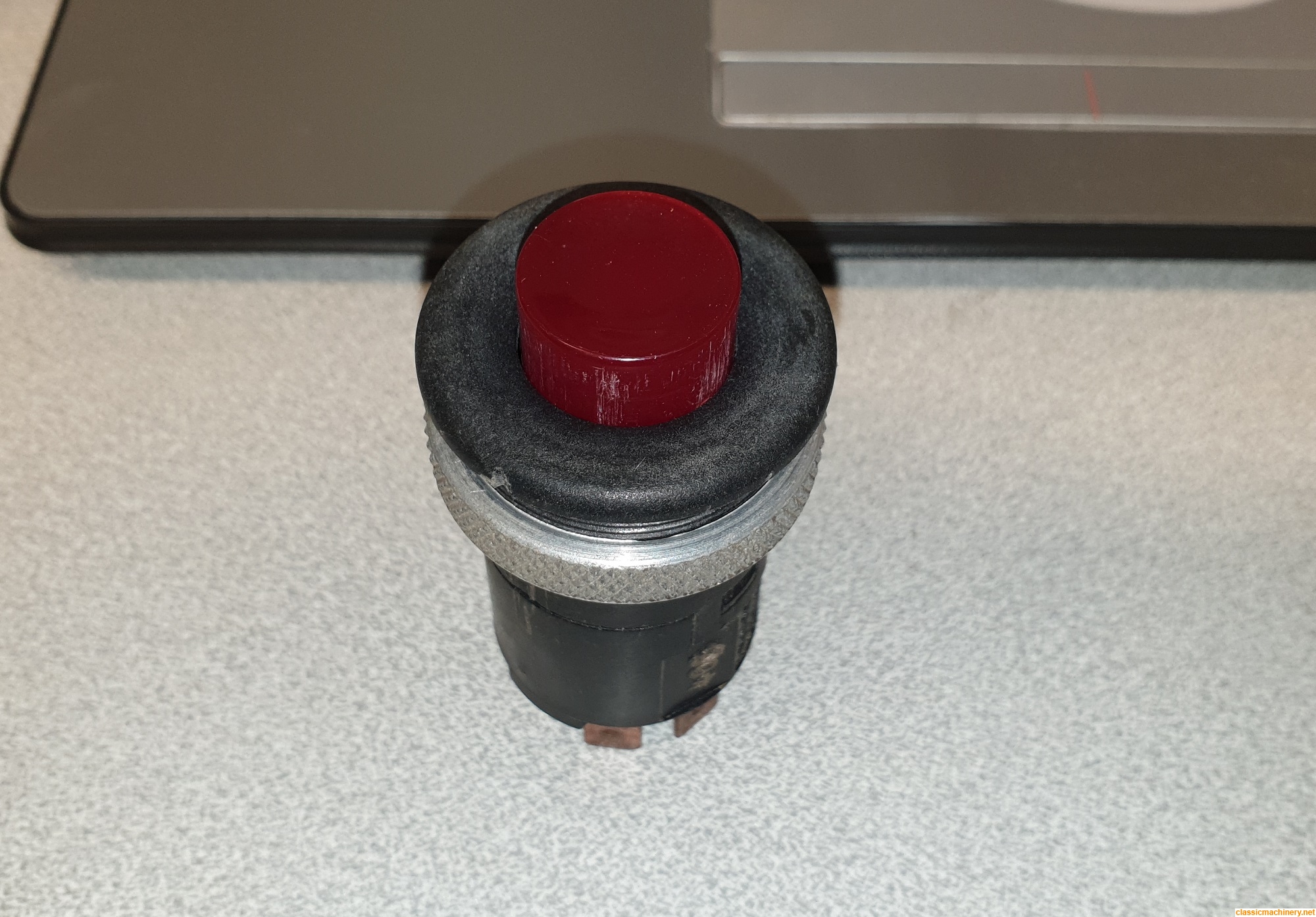 Tim it's amazing just how much dust and muck things pick up whether in plant or other machines and the muck can easily stop things from working, let's hope you've cracked it.

I usually crack a problem like that - - dismantling it.

I've just updated 1987 JCB 3CX Syncro Shuttle Drive Problem about the problem with what I am hoping maybe the cause of the issue.

Most of yesterday was speant cleaning the loom even more when I discovered that the section that lives behind the steering olumn shroud could be disconnected and then worked on on the bench. That allowed me to inspect everything far more closely and in more cumfort, where issues with corrosion in and on all the connectors could be addressed. It also gave me the chance to make proper soldered (well, as proper as you can get with Indium based solder and the wrong temperature soldering iron for it - lead free crap, mutter grumble) on connectors and spliced in wires rather than leaving the crimps and Lucar joins in play. In addition I made a better job of rooting the wires and cable tying them up so it will be less of a jumble under the shroud too.

As well as the Ignition Relay connector problem I also spotted that Terminal 49a on the Flasher relay showed signs of having got rather hot: 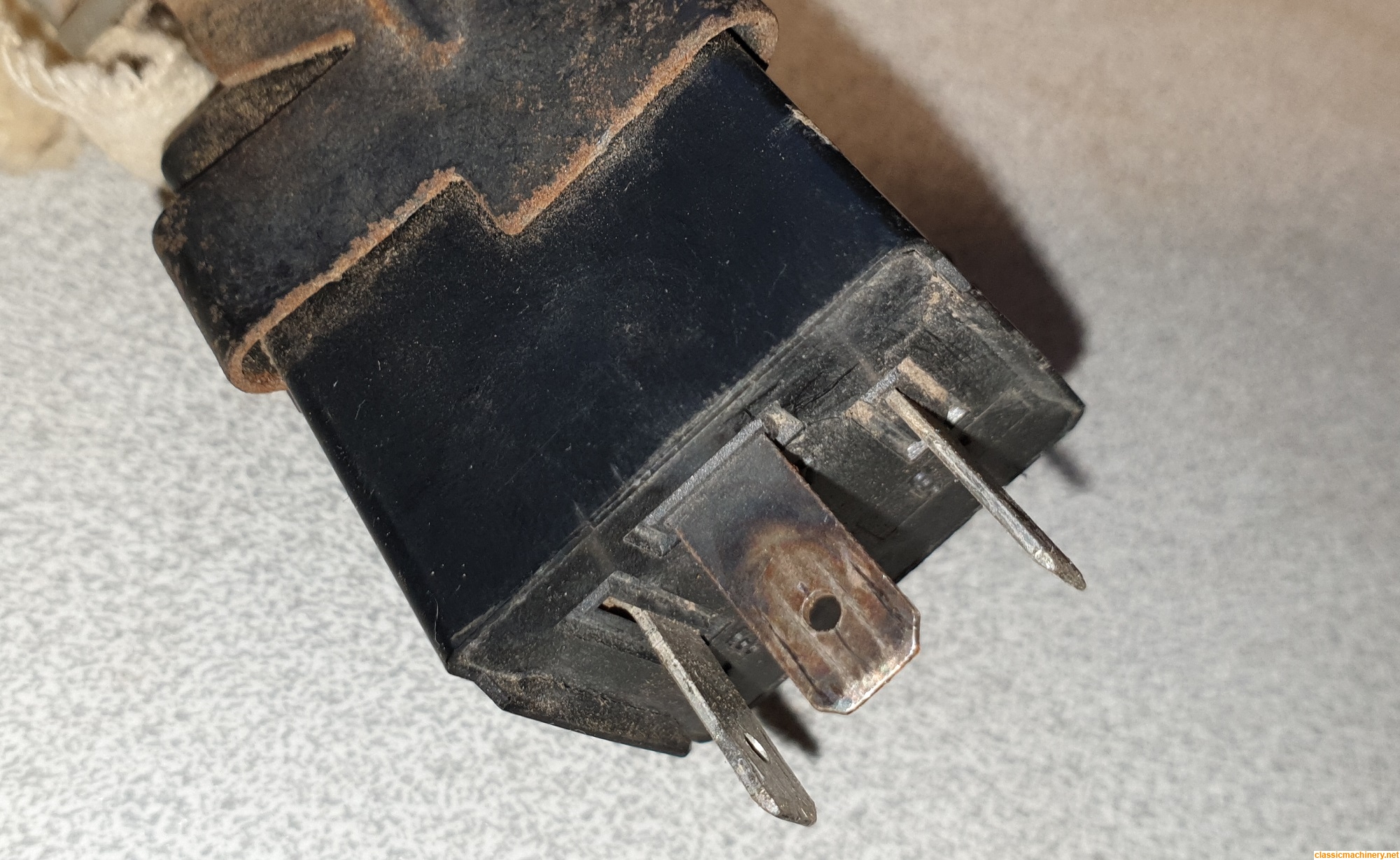 I happened to have a Ring heavy duty towing flasher relay of a similar type to the Hella original in the garage, and compared the resistance between the terminals on both and they were broadly speaking the same, so I'm hoping it's not damaged, and that rather like the master ignition relay the issue with indicators was related to poor connections and perhaps the gummed up hazard light button.

All the work on the loom has fixed some of lighting issues (none of the work lamps, number plate lamps or the beacon work), but still there is no drive.

Well this morning, as I have described in the other thread I found the issue with the shuttle control; it was the starter relay intermitently failing to energise the shuttle and transmission dump circuit. With a bit of a clean of the contacts inside of the relay all apears to be well, for now.

With that resolved and the battle fought with getting the steering column shroud back over the loom I moved on to finishing off the service.

In removing the the bolted on section of bonnet to access the hydraulic system filter I found out why it never sat right; the rear pegs that are meant to sit in brackets attached to the bulkhead were reating on them! I also discovered why there was a flying lead in the engine bay, it was meant to be attached to the Blocked Air-Filter sensor, I'm guessing at somepoint someone removed the bonnet without disconnecting it and broke the wire. Simple enough fix; cut the wire back to good clean copper, soldered on a new section with a female spade connector, bit of heat shrink and straightened out the male spade on the sensor.

With the bonnet off I changed the two part air filter and gave the jubilee clips for the inlet pipe and the mushroom prefilter a clean and coat of copper slip on their clamp screws.

Then on with the hydraulic system filter change and the first tragi-comedy discovery of the day: 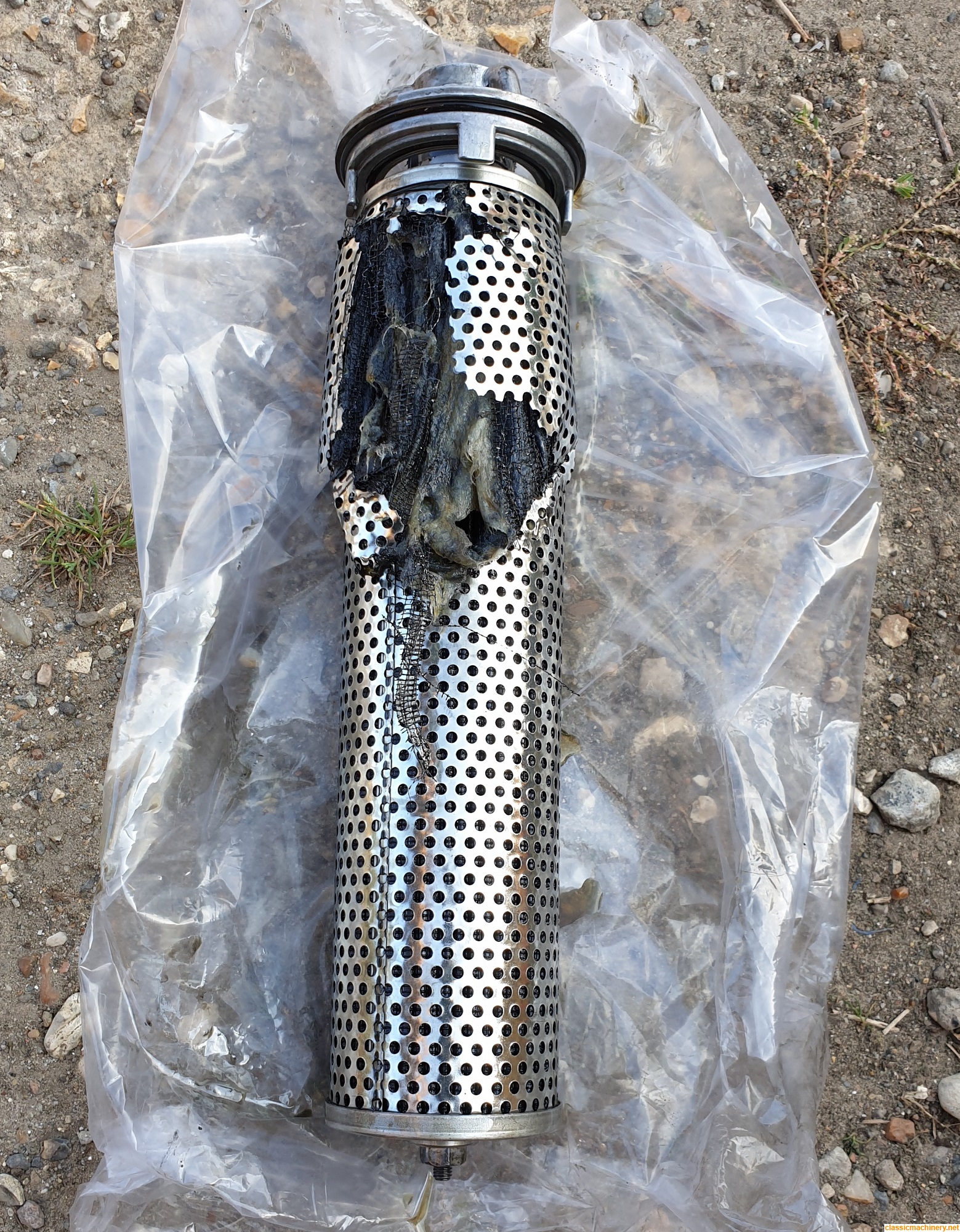 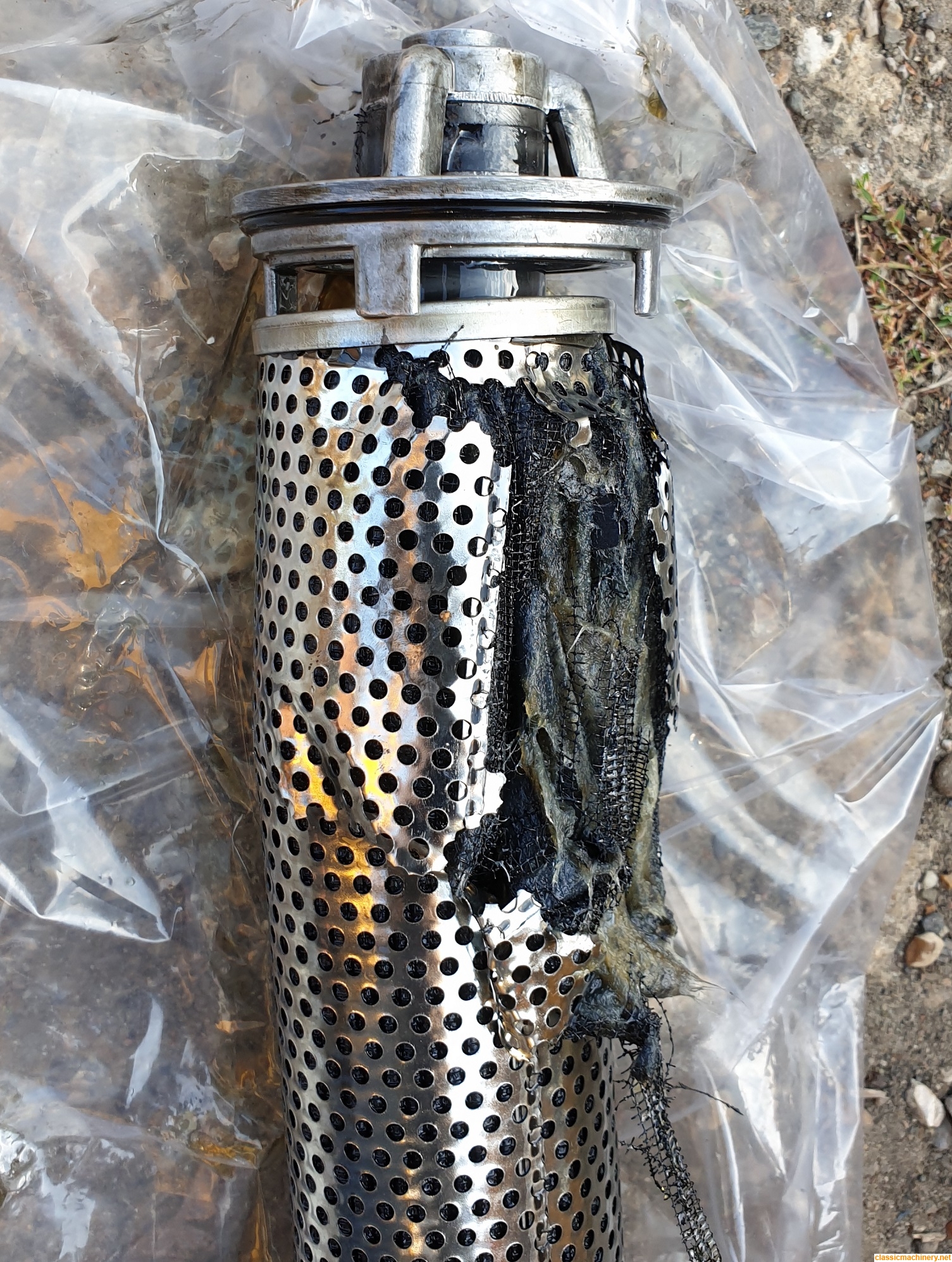 I just do not know how on earth this could have happened, had the filter become so blocked at some point that it burst!?! Or was the machine last serviced by someone with the mechanical skills and patience of Jeremy 'Hammer' Clarkson!?! I mean seriously, come on!?!

After a happy hour cleaning the filings, swarf and other magnetisable detritus off the magnets, I offered up the new (pattern) filter and found that it was a bit too short to be clamped in place by the spring and nut on the end of the shaft, I had to resort to adding washers to pack it out and make sure it clamped in place nice and tight on the seal, not skewed off to the side ond on the flange like the one I removed... Inserted that back into the housing and topped off the oil to give the filter a chance to soak some up.

The next comedy moment was in removing this 1/2 drive 14mm socket from the thermostat housing: 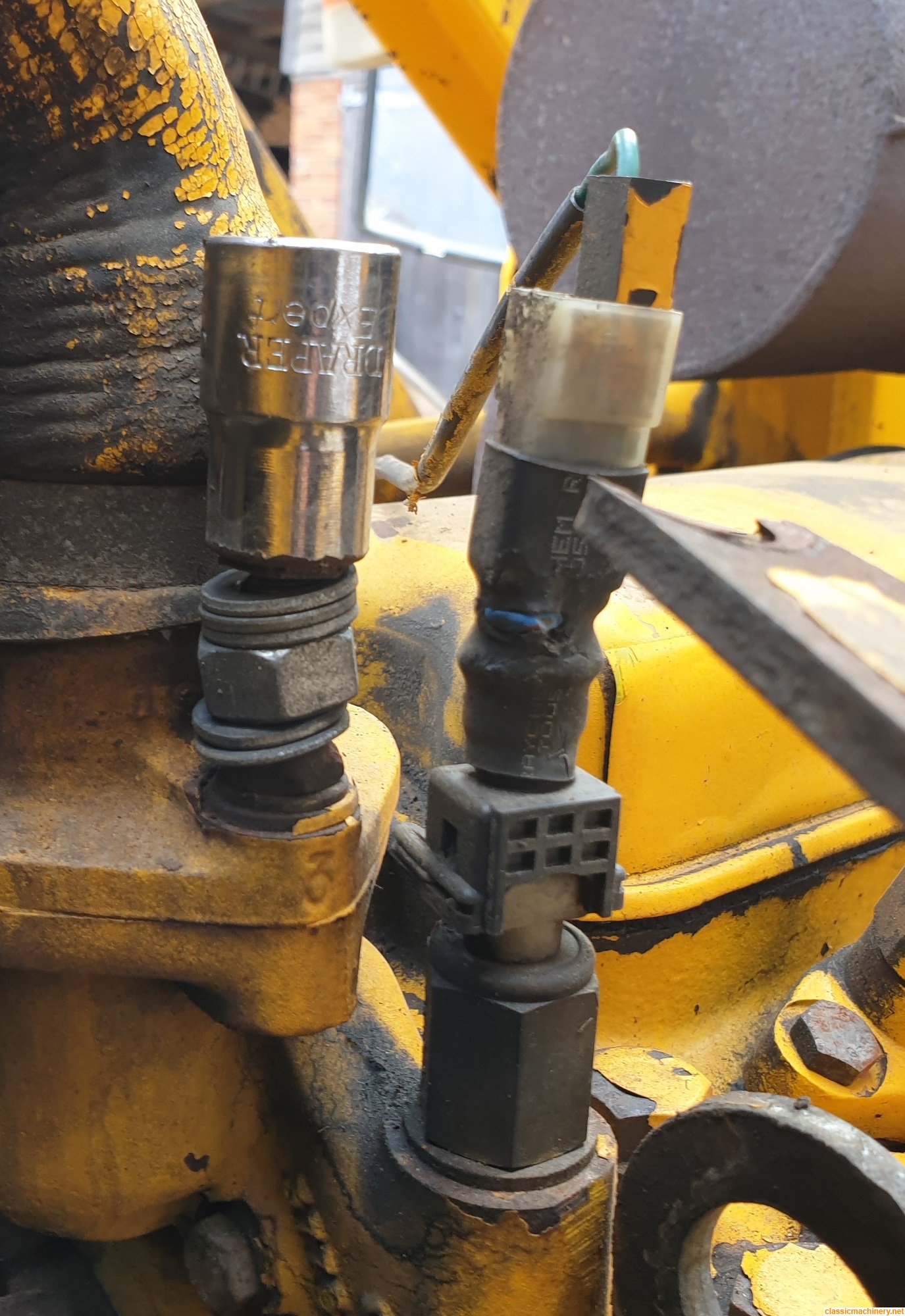 We had spotted it nestling in there when the JCB arrived, I'm guessing someone in a rush left it jammed on the nut, probably when they were attempting to bodge the coolant header tank back on. I'll knock up a replacement bit of bracket to re-attach it to the stud, rather than leave it cable-tied to the engine oil filler tube.

Socket removed, Fuel Filter next. When I ordered my service kit a much shorter fuel filter arrived than the one I found on the engine. I initially thought that I was missing a filter as the stubby looked just like the one I'd seen attached to the chassis leg with the very dirty glass bowl below it. The seller I got it from never got back to me when I quized them about the missing filter. Then, while I was ordering up a new stake nut and and extra oil seal for the gearbox from Vicary I asked them about the filters. They patiently explained that the 'filter' on the inside of the inner wing was a coarse debris trap, and had no replacable filter, the one on the engine was a stubby and there should have been a glass bowl beneath it...ah...mine had been replaced with a single large filter, so I bought a new glass bowl (only a fiver) too. Anyway got the filter off and...comedy gold time: 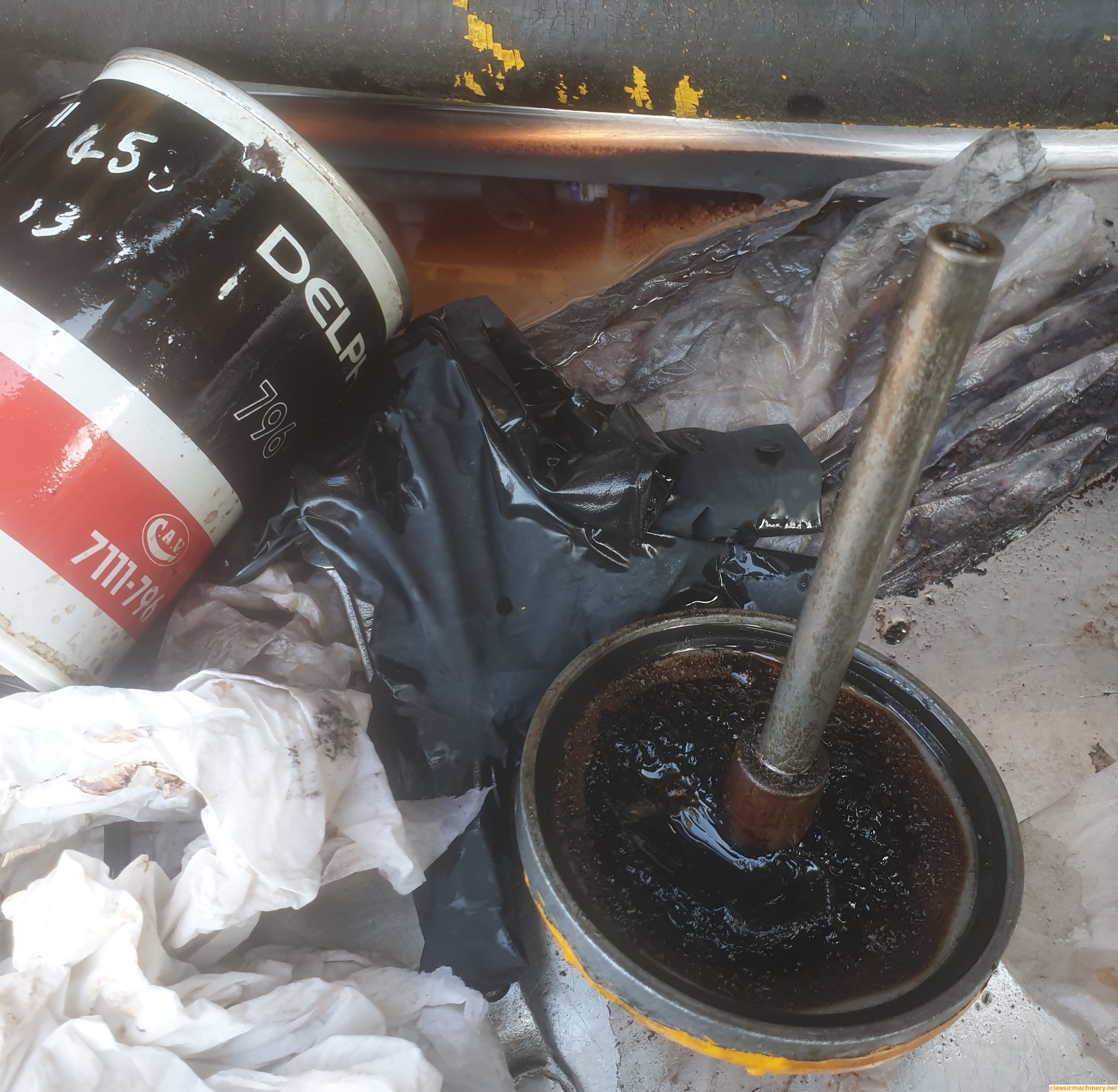 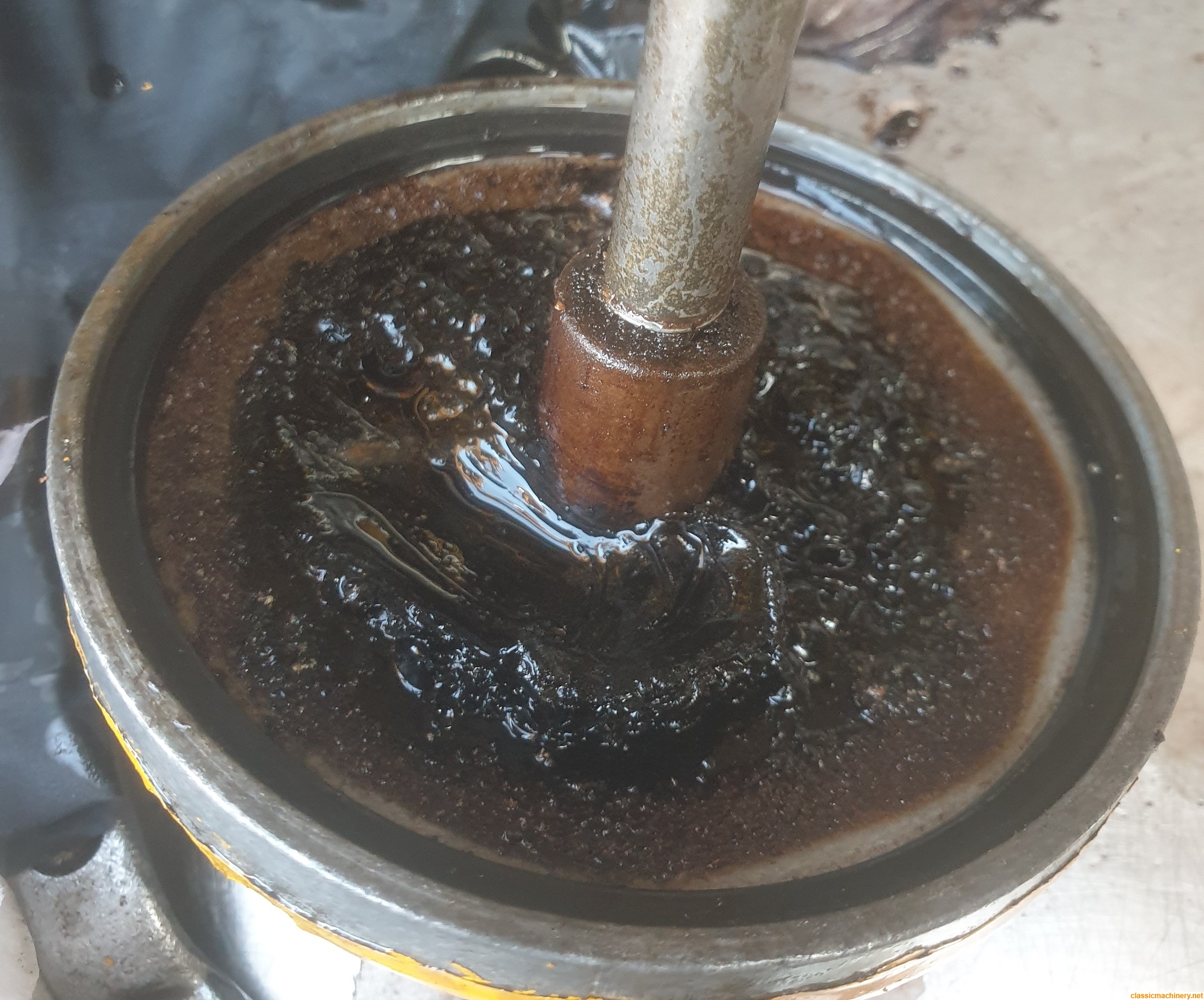 Soooo, the filter I removed looks like it had 4500 written on it in paint marker with a date, one presumes from the last service. The machine currently has just under 4900 hours on it, I'm wondering if that last service was possibly in the 20th century...that lovely red, thick, sticky gloop I'm guessing could be an emulsion of the red dye from Red Diesel, rust and condensate. It was a bugger to clean off and beneath it there was a layer of varnish that I had to soak in brake cleaner then use some red Scotch-Brite to clean off. I had quite the battle to get the plastic drain plug out without destroying it, but got there in the end. I think perhaps no one had bothered to drain off any water with said plug for many a year...

Fun and games with finding enough small diameter seals to go on the glass bowl then went on, I had to reuse one in the end as my new filter only came with one, and the new bowl two large diameter which only fit on the top of the filter where it attaches to the housing. Got it all back together in the end, then thought I would clean out the debris trap on the chassis leg, as it looks like a similar construction...started to undo the top bolt and thought there was rather a lot of fuel coming out...when it dawned on me that it was gravity fed from the bottom of the tank! Hasty re-tightening of the bolt then ensued. Need to have a bit of a think about cleaning that out, because I also need to replace the fuel hose that comes from the tank to it as I have noticed it is weaping. Really need to work out how much fuel is in the tank so I can find a suitably sized receptacle to take it, annoyingly it looks like my fuel gauge is reading backwards, and the right angle tank filler neck make it awkward to do a dip check.

I had been hoping to finally warm the engine up so I could perform the much needed oil change, only a classic schoolboy error stopped that game. In my haste to run the engine up before I lost the light, I forgot to prime the fuel filter with the manual overide on the mechanical fuel pump...now I have an airlock to deal with in the morning

Oh, looks like I forgot to post the pics of the missing pin from the shuttle control lever which stop it, and the indicator/wiper/lights stalk, from spinning on the steering column: 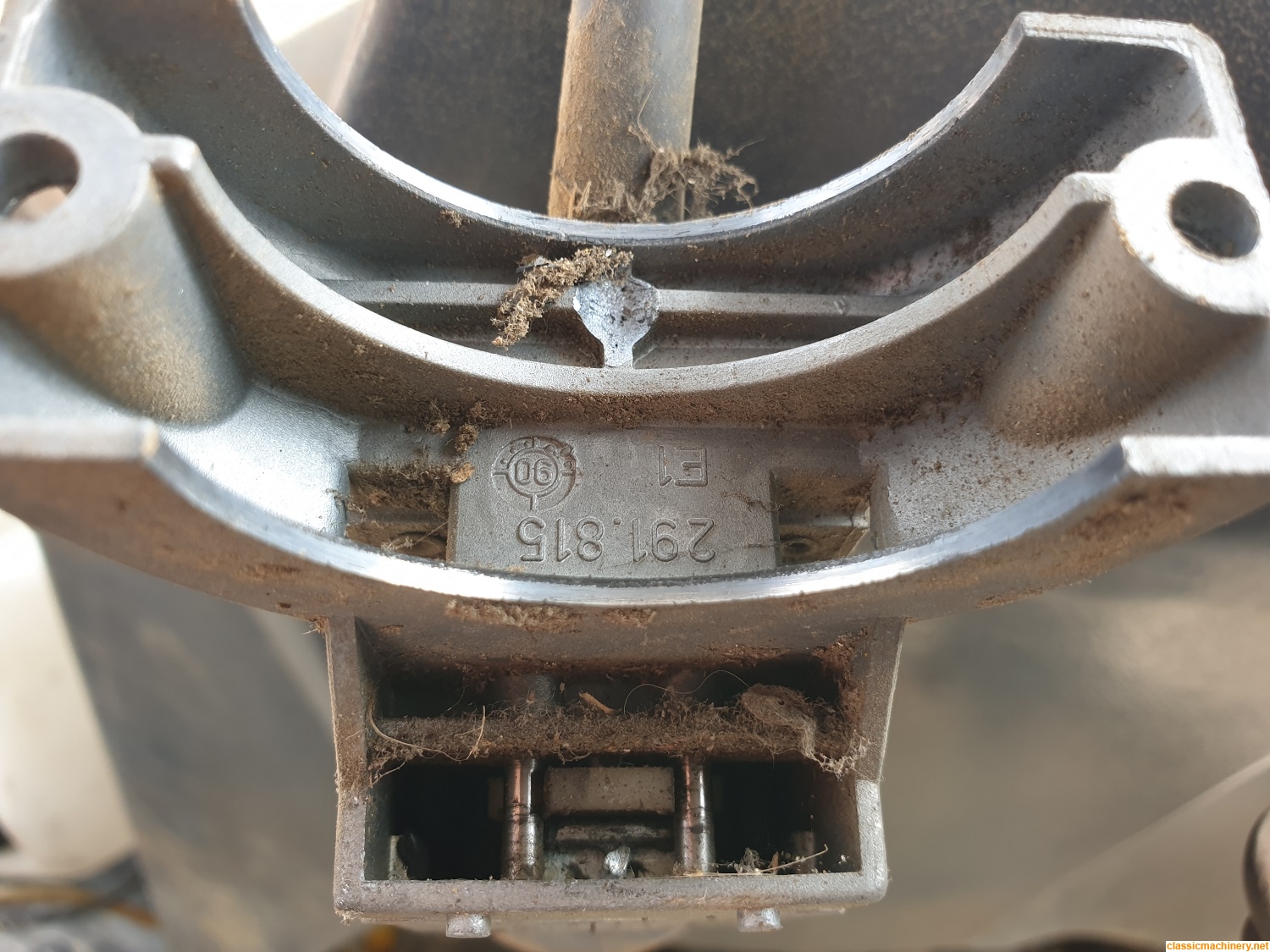 I drilled through the remains of where the cast pin would have been and then ran an M6 tap through the hole, then a bit of stainless M6 thread stock with a slot cut in the end to help me wind it in with some threadlock and one fix: 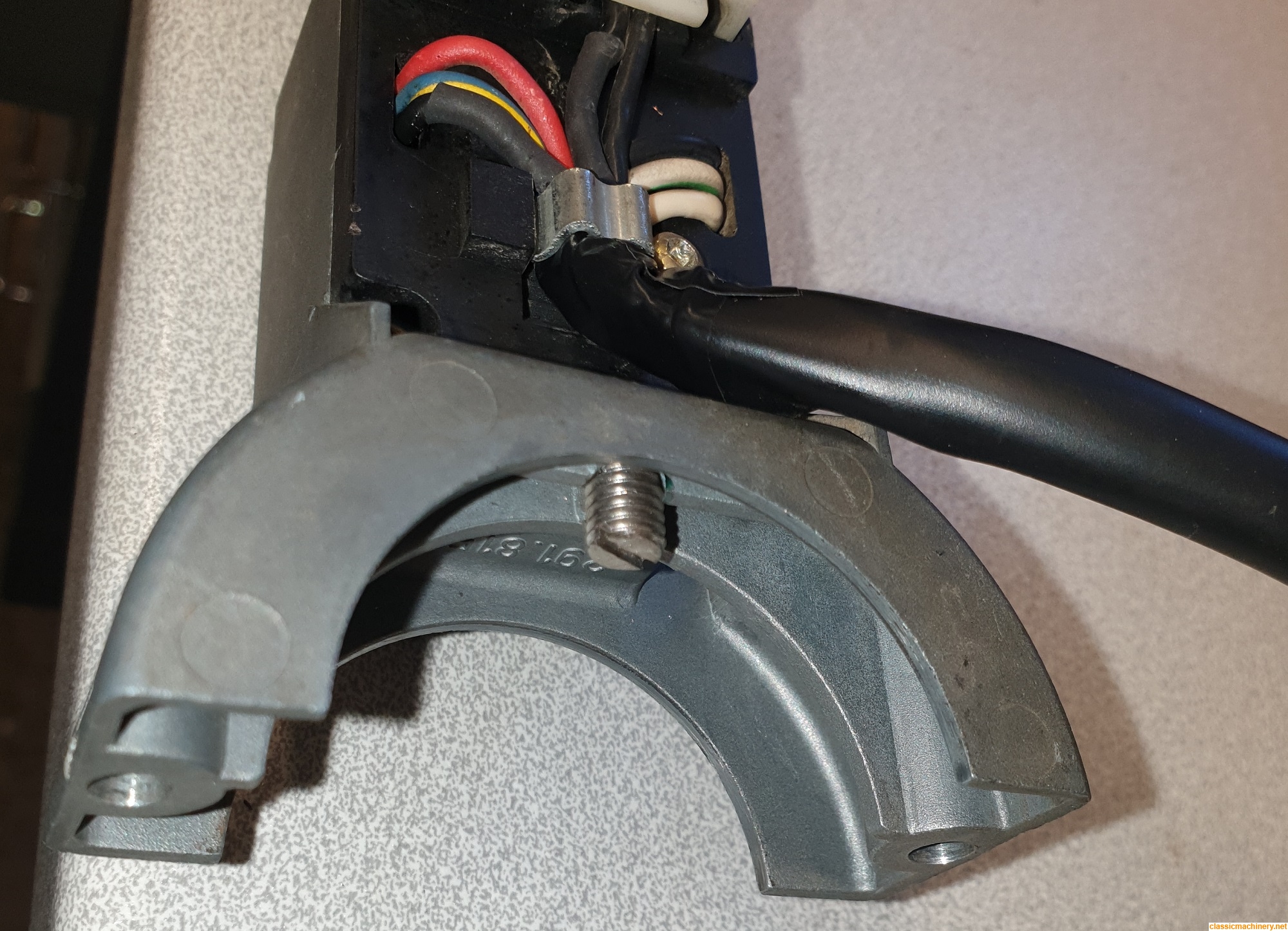 With added solder and heatshrink, because some clot, despite taking many precautions like removing the cable clamp to move the cable out of the way, and put a peice of steel beween the cable and where the drill was going to come through, still managed to catch two of the cables with the drill because the piece of steel wasn't fixed in place and fell away as the drill bit hit it

Was the hydraulic oil a milky colour? If so then there has been water in the system and that could explain the filter collapse.