Anyone identify this Dozer of mine.

It does have hydraulic adjuster, i'm assuming the broken spring is some sort of shock absorber to keep it tensioned.

I've got a 10ton hydraulic portapower with a few different cylinders and like you say, looks pretty slack so it may well push back on. I'll try and avoid the oxy-propane, good point on affecting the temper...
Top

Hi, Darklegend.
I wuz gunna say sumpin like Mrsmackpaul but had to go out and 'She' beat me to it. You also have tha weird blade out front that would make a good anchor point for a couple of 'come-alongs' to pull from. Personally, if a replacement spring can be found, I think I'd look at doing the replacement BEFORE you try to put the track back on as that MAY eliminate any need to break the track to get the old spring out and the replacement spring in.

Hi, TCtractors.
Maybe you'd better go have a short chat with this bloke too about IH track loader nomenclature.

Just my 0.02.
You have a wonderful day. Best wishes. Deas Plant.
Top

Well Deas, at least the add has the correct listing of a B100 early style clutch machine, the 100B was born with a torque drive and 3 pin mounting, I see the add comes with a slightly off kilter snap that needs a screen movement of 90 deg to be happy with, thelittle shovel looks to have some reasonable chance of becoming a little cracker, the last few months I have been working on quite a few tracked loading shovels from the 60's to the early 80's (CAT 951-955) I must say its easy to bury a good amount of money in them to get something only half good, as these shovels went to Hell and Back with use on our little rock, I think its easier to strip out the frame hollow and start from this point on a re-ferb, my own shovel (951B) is now nearing the point of looking good, I dont have much coinage stuffed into it but time wise its sort of painfull to ponder, anyhow I will be keeping my eye on you as you need it???

Hi if you are still out there? This is either a TD8B Series 11 or perhaps a TD6B (if that continued on to the series 11) The TD8B had 90% parts interchangeability with the 125B. The TD6B was based on the 100B but was discontinued as performance of the two units were very similar. Only about 400 TD6B's were produced & I am not sure if they carried on into the series 11 which came out in 1974 - the squared off rear tanks show it as '74 on.
The original serial no plate was found near the blade controls on the right. To start it the Hi - Lo mech gear lever between your legs has to be in neutral, likewise the F-N-R powershift lever on the left, & the 'Safety lock' lever engaged - this latter locks the powershift in neutral. The centre pedal is a decelerator, when shifting direction this must be floored & the tractor stopped on either brake or the blade. IH's bugbear was the ex CAT driver who would reverse at full throttle without even braking as he ran out of dirt dozing downhill. The two little levers on the left are power operated steering clutch levers - this system operates at the same 400 psi from the converter charge pump that also feeds the F-N-R clutch packs, & pumps 'Castrol Dextron' ATF fluid round rather than SAE 30 oil as in the CAT's. Filler / dipstick is by the mech gear lever. Under the floor plates is a transmission spin on filter. Above the decelerator is a pull out red 'Choke' knob. Fully in = run, out but not held out = excess fuel cold start, out further & hold out is stop engine. Track adjust is a ram by grease gun.
IH UK Doncaster folded late '81, A guy named Ray Medford bought up the spares stock. Member Sean on here will know more, as would Romneyman - he is an ex IH dealership fitter. The blade is a special, maybe for either dozing forest fire breaks, or maybe for the peat industry. Std blade for the TD8B only went up & down hydraulicly. It was possible to angle the blade but only from the ground manually - likewise to put more cut or bite on the blade. there was no tilt of any kind. Gears were Lo = up to 3.5 mph, & Hi up to 4.7 mph. Tractor must be stationary & F-N-R in neutral before shifting the mech Hi N Lo lever.

I seem to remember the 125B outsold the TD8B by 4 to 1 in thier heyday. Towards the end an IH salesman told me he went from selling a machine a day, to one a week, to one a month. Sad because I remember it as a very capable tractor. If the transmission is viable then the rest may be worth saving. Worries otherwise are seized track chains, steering clutches having bonded together, & siezed on brakes - all from standing in the damp. sorry I did not see this earlier as I used to drive & service one
Top

Hello, thanks for the comprehensive reply! Plate says it's a TD8b series II as you say.

Do you know the operation of the blade lever? It seems to have been butchered and I believe has a left and right as well as forward and back for the blade. Perhaps to run the rear 4 pipes flow and return? It had a scraper box fitted at one point in its life.

I believe it was ex forestry so theory about fire breaks sounds very plausible!

Thanks for the reply

P.s it's still sat in the field looking sad. I will get to it one day soon hopefully...
Top

The standard blade lever was thus, first movement toward the front windscreen is blade lower under power, further movement in the same direction is float, (i.e. the blade follows the ground contours under it's own weight - ideal for smoothing out in the reverse travel, I think there was a 'detent' in float position meaning it could be locked there until moved again.)
Move back to where you started from (lever should naturally rest there) Blade stays put. Pull further still toward the rear - blade lifts untill lever released or ram ends it's upward travel.


The set up you have would need three functions to have worked unless the blade was removed when towing the scraper - side to side movement would give a second function from the std set up. There is a possibility of a diverter valve being added in to a pair of ram supply lines - this means say blade up down would divert to second scraper function & leave the blade ram locked.
These diverter valves were fitted to IH 125B loaders to allow the 3rd function to either operate 4 in 1 bucket open close or the rear scarifier up down.


If the rear (scraper) hose ends have self sealing couplers (likely as the tractors were transported seperatley to scrapers) then it is no matter as the Main Relief Valve (MRV) within the spool block will just lift @ 2000 psi & blow the fluid back to the tank if you were to operate the scraper functions with nothing fitted to them. It is possible to follow the hoses back from the big single central vertical blade ram to the valve block where they will enter a spool valve one above another, - & see what movement of your lever causes this spool to move up & down, thus that action of the control will raise / lower the front blade.
I drove & knew of several of these TD8B's - but only saw an IH advertising photo of one linked to a towed hydraulic scraper box. It has been known to convert cable towed scrapers to hydraulic to allow modern tractors to to work them. What you have is a bit special if it could be got going - ideal for digging farm ponds etc if a box could be found, & dare I say it still capable of earning a crust if it ran. A farmer near me bought a Cat D6 & box to dig out fish pools & now charges the public to fish there! One correction I think the parts guy was actually Frank Medford, not Ray
Top

Brilliant. Thanks for the comprehensive reply!

We have a pond (1acre) dug out by first a JCB 6D and then when we realised that wasn't man enough and O&K RH9 we owned. The little IH was for moving the spoil. That was 30 years ago!
Top

Why let an old topic die?.I think I found this Brochure on eBay. 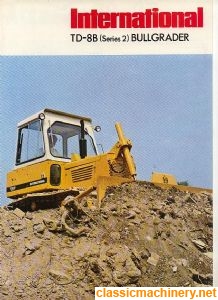 Saw one for sale several years ago here in Victoria. Never seen another..
Top

This TD8B recently for sale in Australia: 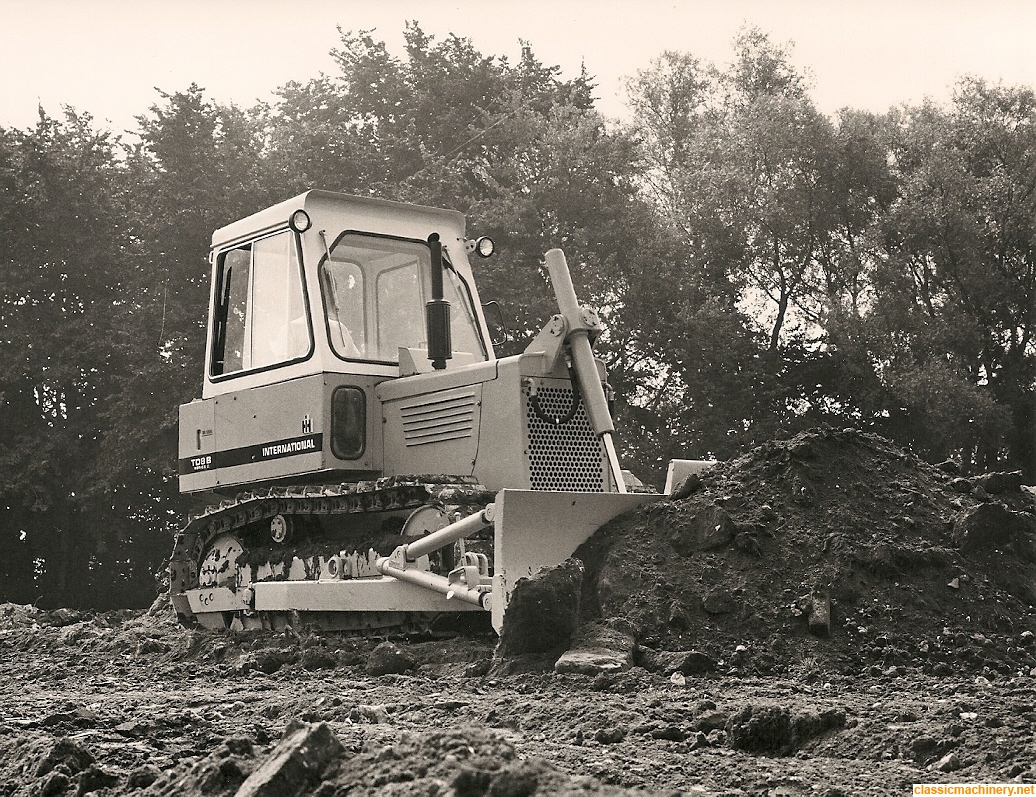